in the toolbar produces the same.

The various actions that can be performed with a subset of signals in a graphic are described in Signal viewer entry. 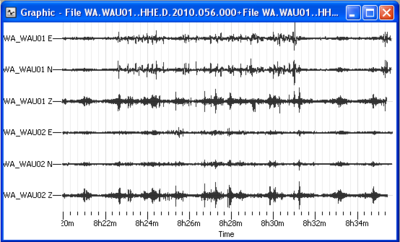 The graphic viewer makes use of a general graph object from the SciFigs library allowing to customize and save the figure.

When only one signal is represented, the Y scale is the signal amplitude (count or volts). When various signals are shown, the Y scale ranges from 0.5 to n+0.5 where n is the number of signals. The axis label are generally replaced by the names of signals suffixed by the signal's component. The baseline (reference line with a null amplitude) of each signal is located at y=1, 2,..., n. The signals are drawn around their baseline. The maximum amplitude around this baseline is adjusted by the normalisation parameters described hereafter.

Layers in a Graphic viewer 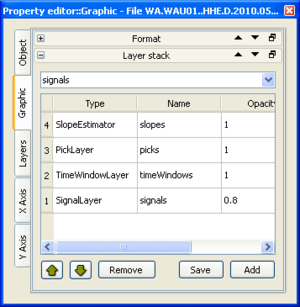 A graphic viewer is a superposition of 4 layers. They can be seen and modified by double-clicking on the graphic or right-clicking and choosing Properties, in the Graphic tab, box Layer stack. 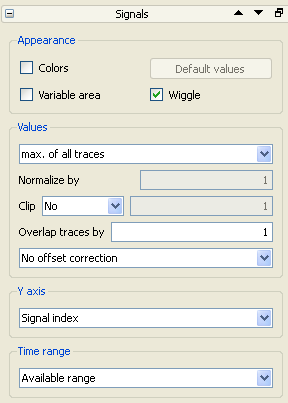 Signals are plotted in a special type of layer developed especially for Geopsy. The parameters to customize are accessed by double-clicking on the graphic or right-clicking and choosing Properties. In the Layers tab, the first box entitled Signals contains the parameters linked to the signal layer.

In the Appearance Box the following options can be checked:

In the Values Box the following parameters are available: 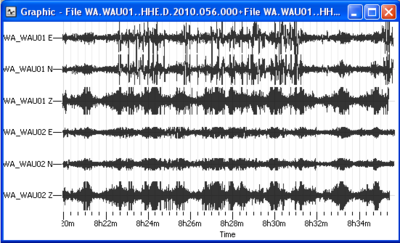 The procedure remains valid when only one signal is plotted, except that max of each or max of all have no effects.

An example of signals normalised by visible max of each trace, clipped at 25%, and with an overlap of 4 is given on the left.

In the Y Axis Box one of the following option can be chosen:

In the Time range Box one of the following options can be chosen:

Picks are time markers that you can use to identify particular times and/or phases (e.g. Vp arrivals for refraction, time limits for signal processing such as a time domain taper). Picks appear as thick colored vertical lines in the time line of the traces. Several marker sets can be defined (one marker per trace), for example 1 marker set per wave arrival.

For that purpose, right-click on the graphic viewer and select Pick. A dialog box appears with the picking options:

It is not possible to pick in the Magnifier window. 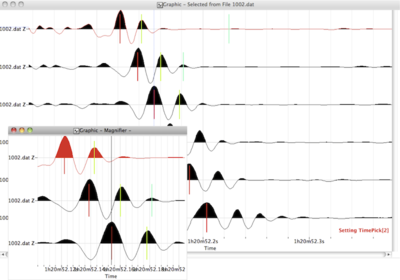 The active trace is highlighted in red and the current marker set name is displayed in the bottom right corner. Once Setting "PICKNAME" is displayed, any click on the mouse left button will modify the value of the current pick on the active signal trace, highlighted in red. Use the Up and Down arrows to change the active signal, Left and Right arrows to switch between marker sets. If hitting those keys has no effect, check that the main graphic viewer is active, if not, click in its title bar (this is frequently the case when a magnifier is used). If you press SHIFT and the left mouse button while moving the mouse, the current signal is automatically changed and time picks are modified when the mouse hits the signal base lines. 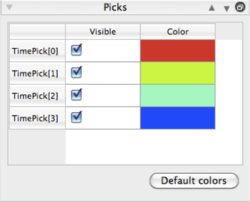 Properties of the Time Picks Layer.

You can select the visible time picks as well as their colors with the Box Picks in the tab Layers of graphic properties (Properties are reached by double-click on the graph or right-click>Properties) . These parameters are saved and restored in the same way as other settings.

You can modify picks in a table by editing the corresponding fields. However, it is usually edited in the graphic signal viewer with mouse clicks as explained above.

Contrary to tables, it is not possible to select particular signals in a graphic viewer. The drag and drop mechanism works in a similar way but all the signals are considered rather than a selection. Graphic viewers also accept drops of signals that are added at the end.