Note: you can load as many curve as you want. However, you MUST keep only the curves that you want to invert. PLEASE do not forget to REMOVE the Data Sets you do not want to be used in the Inversion. 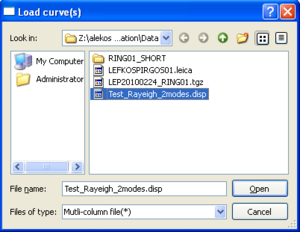 By pressing button Load a pop up window appears and you can select the ASCII file that has in a multi-column file format the Dispersion Curve information. After you select the file and press Open another dialog box appears where you can define the type of information you have in each column.

By pressing Clear you remove all curves from the memory. In order to add a curve you should start from loading the curve. It is highly suggested after some processing with different Dispersion Curves to save the curves before removing everything. Do not forget if you use Save you also add the Log information of the work that has been done with different curves so that you can repeat the procedure later.

You can also associate a special color, pen and symbol to each curve with the Legend button. Naming curves with unique names might be also useful.

Once you have at least two curves loaded, you can select the Average button to average or merge several curves. A dialog box lets you select the curves to average or merge. Merging applies to non-overlapping frequency ranges, average applies to overlapping ranges. Both actions are automatically performed. If more than two curves are selected, curves are averaged or merged one by one using the same process:

is the ith item in population j.

The mean and variance computed over the whole population is then: 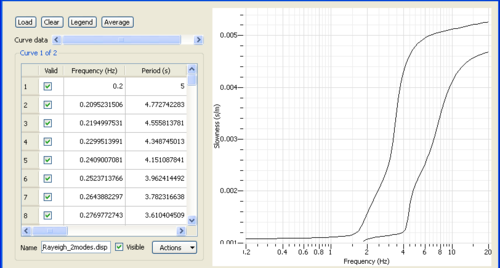 All curves loaded or created so far are displayed on the attached plot (right hand side). Only one curve is shown in the Table (gray frame) each time (left hand side). To change the active/shown curve, move the horizontal scroll bar above the Table entitled Curve Data. The title of the frame just below the scroll bar give the index and the total number of available curves. All items within this frame Curve 1 of 2 apply to the current curve:

Saves current curve to a text file made of 4 columns: frequency, slowness, standard deviation and weight. The log is saved as comments before the curve samples.

Shows a curve log of all actions performed on the current curve.

Removes the current curve from the plot. This is the only secure way to Remove a curve from the list of data we have. If you want any part of the removed curve you have to load it from the beginning. If you need to remove all curves please use Clear

Reorganize sampling of the current curve. Samples can be distributed on a log, linear or curvilinear scale. You can define any frequency range even outside the current available range. In this later case, samples are extrapolated and set as invalid. If the defined range is smaller than the current range, outside samples are not affected. To remove them use Cut.

Removes all samples outside a defined frequency or period range. It should called keep but for reason of consistency with other software we use Cut since it cuts the data that are outside the limits we define.

Smooths the curve... currently not implemented.

You can edit all values like in a usual work sheet.

If you want to set the same value to several rows: